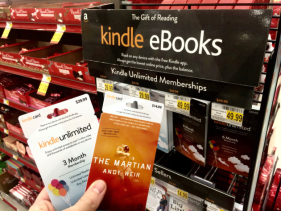 When I began writing in 2009 and released my first independent book, self-publishing was frowned upon.  Only losers went that route – rejects from publishers – would be authors with VANITY written across their foreheads, with an “L” for losers. The prejudice was great, and as an individual, I suffered the pangs myself of scathing reviews, trolls, and one-stars.

Now it’s 2018, nearly ten years later, and the collective landscape has changed dramatically.  Independent authors have hit the NY Times and USA Today bestseller lists.  Some writers are making six figures a year (“Over a thousand independent authors surpassed $100,000 in royalties in 2017 through Kindle Direct Publishing”), while new writers flood the market with 99 cent books and crowd Kindle Unlimited.  As a result, the expensive ebook prices from large publishing houses are beginning to suffer.  Why pay $9.99 for an ebook when for $10 a month you can get plenty more?

Read the latest thoughts below at GeekWire.com

The future of ebook publishing may increasingly belong to the independent author, especially as traditional publishers charge a premium for their traditionally published product.