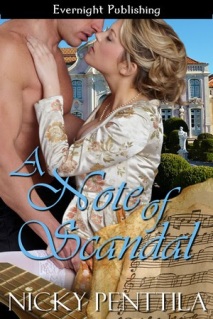 Reviewers Say: “Combine Bernard Cornwell’s Sharpe novels with Jane Austen, add a touch of Dickens and a modern sex scene, then you’ll have the flavor of Nicky Penttila’s Note of Scandal.”–Goodreads
The Story: A desperate composer tricks a principled newspaper publisher into printing a false story, and then falls for him. How can she prove that she’s worth a second chance?

Available Now:  Amazon and Evernight (all formats) | Paperback at Createspace | Audiobook at Amazon/Audible (and via iTunes)

Olivia’s face mirrored her surprise. She had lost track of him for only a moment, and yet he had snuck all the way up on her. Had he caught her surreptitiously watching him?
“The music does not inspire you?” He gestured at Rosa, but his gaze remained on her.
“It does,” she said, trying to pull on her familiar careless-girl mask. “I must ask after her tailor.”
“That sentiment isn’t worthy of you.” He whispered, but he could have spoken aloud, as little attention as anyone was paying them in the midst of Rosa’s aggressive arpeggios. “Jealous?”
Her mask faltered. “I did not mean it so.”
“Then how?” He slipped to her other side, effectively cutting her off from Mr. Mellon, who did not seem to notice. Too close. She took a step to the side, turning to face her interlocutor.
“She is part of our family now.” Her voice sounded breathy, unsure.
“I heard you arranged this performance.” He stepped closer. “That shows a spirit of generosity, despite your words.”
“She deserves the opportunity. And it is right to salute Spain.”
“Our esteemed ally.” He nodded, leaning in. “But perhaps it is difficult, to see a woman who is allowed the freedom to perform, to create? Who can let her hair down in mixed company?”
He looked away from her a moment, gazing at Rosa. Olivia did not dare look away from him. She let out the breath she didn’t realize she had been holding. Her mind was addled; she was reacting too strongly to this man, to his words. To his smell, deep and rich. Sandlewood, but hints of the flesh within.
The corner of his mouth turned up. He teased her? The thought cast out her breath again. Her ears had a buzzing in them, unrelated to the passionate rhythm of the guitar.
He could read her. He saw far too much. She reached out to touch him, no, to push him away. He turned at her movement, stepping into the path of her hand.
A thrill of power coursed through her arm. It filled her center with energy of an unfamiliar sort. Unable to stop herself, she jumped. Then quickly looked around to see if anyone saw.
She could never make a scene. Not here in public. She took another step back, pulling her hands tightly behind her, as if they were tied.
Step by step, they sidled to the side of the great room. Toward the shadows.
“Are you disappointed your fiancé found someone else?”
“It isn’t that.” She was not quite sure she could call up a vision of Richard at the moment. Her awareness was centered on the man in front of her.
They passed the seven-foot-high sterling candelabra and into the shadows, far from the crowd. Olivia would not have believed she could feel so alone in the midst of a gala. Alone, but for one other. 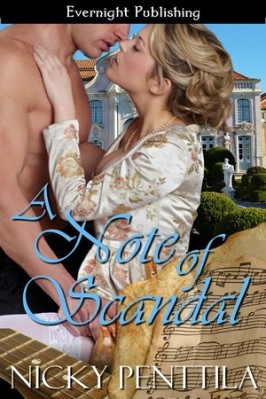 Set in post-Napoleonic England, the lives of William Marsh and Olivia Delancey intertwine in unforeseen circumstances between newspaper reels, music sheets and political speeches. With 246 juicy- pages, it is another must-read for this hot-summer season to make your hearts race!
A Note of Scandal is based on the events of Summer of 1814 in England, when Napoleon has just been defeated for the second time is and he surrendered to the British. When the British economy is coming to terms with the war expenses and thousands and British men, have returned home either in coffins, decorated with a medal or broken. The future of the middle-class men seems rather bleak and many are those seeking reforms in the wake of industrialisation.
Whilst the Lords are still thinking about the Emperor or have left the city to visit their summer country houses, a newspaper battle ensues between The Register and The Beacon.
It is in the light of this scenario that Nicky Penttila succeeds to weave an interesting and consuming novel between two people with different backgrounds and different passions in life.
William Marsh is a late-twenty-something publisher of the newspaper The Beacon. His only purpose in life is to follow in his father’s footsteps whilst side-stepping his mistakes – to tell the truth at all costs. A true journalist he is always seeking a scoop and does not rely on common sources for his articles. His management of the newspaper made him successful and is highly regarded even by Lords. William Marsh knew the power of words and of the publishing industry.
Olivia Delancey on the other hand is a 24 year-old maiden lady. Her father has no male heirs and his political career has ruined the family treasures. With an almost barren house, her passion is music and her prospect to marry her cousin Richard who is bound to inherit her family’s estate. Olivia though is very intelligent and kind-hearted. She never backs away from a challenge and is always scheming. When two of her friends find themselves in trouble, she is the one that comes to their rescue with a seemingly brilliant plan.
Women at the time were considered as beautiful and were regarded enchanting enough to make small talk with; however they were not reputed ‘creative’ and the possibility of a woman writing a book or composing a piece of music was almost blasphemous. Our heroine Olivia Delancey; challenges this stoic post-Napoleonic, male-dominated society and makes her musical tunes famous by publishing them under a friend’s name. Her life becomes tangled up with the future of her friends and her new indirect boss and love interest.
However, enough with the plot as I don’t want to provide any spoilers; this book is enchanting and gripping from the very first page. Beautifully written, the reader is engulfed with the plight of the returned soldiers and their futures but also with the struggle that women face when they are continuously considered ‘less’ than men.
It is a passion driven novel that has a rather fast paced plot with various twists and array of characters and detailed descriptions. Nicky Penttila vividly portrays England of the early 18th century not so much in a ‘Dickens’ way with a focus on the poor but more on the rise of the middle class and the learnt men with no title. Immediately the discourse in the Ale House is reminiscent of a Jane Austen novel and in a similar fashion, the women of this novel are strong, yet tender and compassionate who do not aspire the impossible but work within their limits (given the social limits) to better their futures.
It is a novel of hope with three-dimensional characters that one immediately takes a likening to from the early pages. With no real villain and no specific heroes; the novel offers a variety of surprises maybe not so much in the development of the plot itself but rather in the character’s growth. In fact whilst I personally loved the story and I was also particularly captured and interested in the character developments. I was also pleased that secondary characters were given ample space to talk and to develop as well. This novel is as much about the historical context as it is about the romance. In fact I was pleased to find a manner of courtship between characters that whilst true to its time it was also very human and down to earth. The relationship between the men and women is all about passion and love with enough romanticism as there is realism both in their physical gestures as well in the speech.
If it wasn’t clear from my review yet, I given this book a 5 Crowns – Sovereign Queen of Historical Love rating as it was surprisingly interesting and I couldn’t put it down easily. It is long enough to provide you with a good amount of pleasurable reading and it is engaging instantly. I wish Nicky Penttila the best of luck and I hope to see this book on the silver screen in the future as I do think a ‘live’ rendition would be appreciated by many.
(Reviewed by Countess Samantha)

Available Now:
Amazon and Evernight (all formats) | Paperback at Createspace |
Audiobook at Amazon/Audible (and via iTunes)