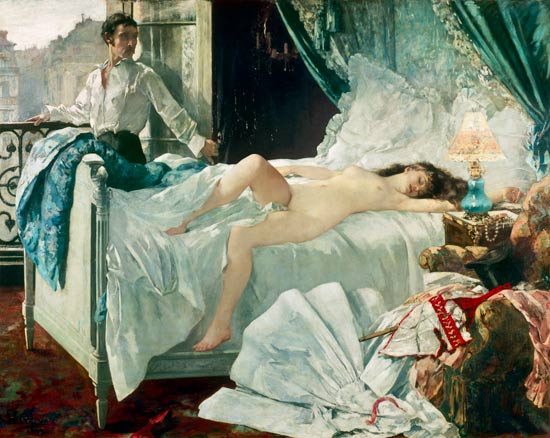 Uninhibited sexual pleasure in the city of love during the 19th century could cause a 21st century woman’s cheeks to blush.  Prostitution and brothels were at their heyday, and they served a purpose to meet the needs of men both rich and poor. After all, marriage was an institution for producing children; prostitutes and mistresses were for pleasure. The brothel was a place of relaxation for men and accepted as normal practice in society.
How many prostitutes were there during this time period? This may surprise you. Brothels or mansions of tolerance, as they were called, housed 15,000 prostitutes in 1883. Between 1871 through 1903, approximately 155,000 women were registered as prostitutes. Each prostitute had to register at the Bureau of Morals. Afterward, they received a huge laundry list of regulated behavior for their conduct indoors and outdoors. During that time period, 725,000 were arrested by the police for suspected prostitution because they never registered.
Jobs were scare for women and survival of the poor difficult. Even married women participated in prostitution. There were roughly 125 brothels in business during 1870’s.  Brothels were considered a cleaner and more regulated system of pleasure keeping individuals from sexual perversion by giving them an alternative to the women on the streets. Pleasures for the male population were rampant on every corner, and like any other morally questionable practice, it carried consequences.
We tend to romanticize all this into lovemaking in romance novels without consequences, except perhaps a baby or two out of wedlock. Unfortunately, all those pleasures carried risks, especially contracting syphilis. How many had the disease? You might wish to sit down. Fourteen to fifteen percent of deaths were attributed sexually transmitted disease. Some reports carry it as high as 17%. One-tenth of the population contracted syphilis. You may think that’s not many, but one-tenth of the population equated to four million people. Syphilis was attributed to 40,000 still births yearly,when gone untreated, progressed into a dastardly end. Half of the cases were contracted between the age of 14 and 21. As one report put it, young people could not wait to dispel of their chastity.
Treatment for syphilis was inadequate and understanding by the medical community of the disease somewhat lacking. There were hospitals and clinics set up to specifically treat the disease, but many found it embarrassing to seek treatment. Effective treatment really didn’t arrive until approximately 1910 with the onset of better antibiotics. Earlier, Mercury and Potassium Iodide were used.

Nowadays, we’re probably a bit more sophisticated when it comes to sex and disease. After all, we’ve evolved, right? Men that sweep us off our feet today are usually wearing blue jeans and sneakers, and we can insist on blood tests before we hop in bed with them. I guess social progression does have its trade offs, but I have a sneaking suspicion with the number of historical romances sold each year women would rather fantasize in another century with handsome, well-dressed rich men.