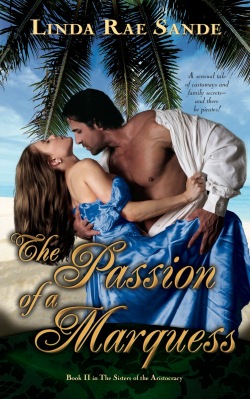 They say you learn from mistakes … but what if they’re not your own?
After four Seasons and no prospects, Lady Samantha is resigned to life as a spinster. Her aunt, Caroline Fitzsimmons, Viscountess Chamberlain, insists they set sail to Italy for a tour she hopes might allow her charge to meet and marry a European aristocrat.
His mines having suffered a multitude of disasters, Ethan Range, Marquess of Plymouth, needs to secure an Italian invention to help alleviate fires. He’s none to happy to discover Lady Caroline traveling on the same ship as he is to Rome. He knows her secret and is rather incensed she’s been able to hide Samantha’s true past from the ton.
While taking a late-night stroll on deck, Samantha is confronted by the scowling marquess. Incensed by his assertion that Caroline is really her mother, Samantha barely has time to slap the man before a sudden storm sends a wave of water onto the ship, washing them both overboard.
Forced to save each other, the two end up as castaways on a deserted island in the Mediterranean. Although they face perils aplenty during the week they’re stranded, they have far more to fear from one another than from hunger, weather, and pirates. Can the two realize the mistakes of the past are not their own? Or will their week on the island lead to more turbulence? The heart may be the best life preserver in The Passion of a Marquess.