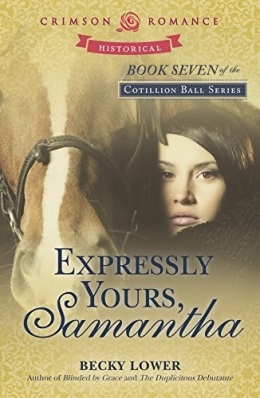 Samantha Hughes needs to get away from her wicked uncle, and, following her aunt’s death, she has one day to escape. A sign in the post office offers an avenue out. She can cut her hair, pose as a man, and become Sam Hughes, a Pony Express rider.
Valerian Fitzpatrick has defied his parents and stayed in St. Louis for the past year. He doesn’t want the weight of responsibility his brothers have in the family business. All he wants to do is ride horses, and, fortunately, the Pony Express is starting up and looking for wiry young fellows.
When Sam Hughes helps Valerian control a runaway horse, Joseph, Valerian’s brother-in-law, tells him their meeting was destiny. Over the weeks and months that follow, Sam and Val work side by side on the exciting Pony Express. Val assumes Sam is on the run from the law, and helps shield his buddy from the Pinkerton agents. He thinks this must be the destiny Joseph talked about. Although Samantha harbors feelings for Val, he has no idea she’s a woman. Until she suffers a stray gunshot wound and he has to undress her to staunch the wound.
Friendship turns into attraction and maybe even love. When her uncle tracks her down, she is forced to run yet again. She realizes the danger she’s put Valerian into, having him try to shield her from her uncle, and leaves him behind with a note to not track her down. Will he be able to find her again, or is he relieved to not have any responsibility again?
Available Now for Pre-Order on Amazon
Author Website

2 thoughts on “Book Promo: “Expressly Yours, Samantha” by Becky Lower”