Yes, this is not a book review, but a movie review that is worth sharing.  Since I actually touched on the subject of an aristocratic family, in my book The Price of Deception, making their fortune in slave trading, I found this movie both moving and inspirational on many levels.

I took the commuter train to downtown Portland to see Belle at the one theater in which it is playing. It is a shame, because the movie needs to be released in many more theaters across the country. It is, frankly, the best film I have seen in a long time. The story pulls at the heartstrings of the audience and challenges each person to consider the value of human life. The themes in the picture are multiple. Above all, it is a true story based on a woman by the name of Dido Elizabeth Belle, the illegitimate, mixed-race daughter of a Navy Admiral, Sir John Lindsay.

The story begins with Dido’s (who I will call Belle in this post) father taking her as a young child to his uncle’s home, who is the 1st Earl of Mansfield (played by Tom Wilkinson). He has been commissioned to sail to the other side of the world and asks that they care for her while he is away. At first, they object to the idea, since the child is the product of a scandalous interracial affair between Sir Lindsay and a Negro slave. However, Belle’s father truly loves his daughter. With no other family but his uncle to care for her, he beseeches him to bring her up in the life deserving of his title and her bloodline. They relent, and Belle grows up in their household, with another girl her same age (played by Sarah Gadon), who is her cousin and uncle’s ward.
As Belle matures, enjoying her privileged life in the home of an aristocrat, it becomes obvious that her uncle and his wife do love her. However, there is still that social line of what is acceptable, such as being able to dine with the family. The lines that are drawn confuse her, but she accepts them.
When Belle learns more about the plight of slaves, she struggles with the reality of her identity and being called mulatto. Eventually, she embraces the fact that her mother was Negro and an integral part of who she is as a human being.
Belle’s father dies and leaves her a substantial amount of money, but she is not encouraged by her uncle to marry. He believes that no one would accept her, even though she is a well bred heiress. Her cousin is introduced instead and begins her pursuit for a husband. In spite of her uncle’s disbelief that Belle could catch the eye of a man, she finds the attention of two very different individuals. 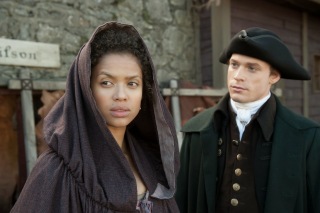 The class separation is starkly portrayed, as well as the plight of women who have no inheritance and must find a husband in order to survive. (After all, it’s 1789, or thereabout, and women had no rights.) It also challenges the audience over the value of human life, the way we view others of different color, and the bravery of men and women who worked on bringing about social change. The fact that Belle was born and grew up in a family where her great uncle was the Lord Chief Justice, is by all rights providential. Their relationship forces him to examine his own conscience regarding slavery and human rights, influencing a decision in his court that changes the future of England. I found the film to be a moving story on many levels. When I shed a tear at the end and it deeply touches my emotions, it is well worth five stars.

Casting and direction were wonderful. Gugu Mbatha-Raw, who plays Belle, did an outstanding job of portraying the character in her struggles and self-realization. Tom Wilkinson was excellent as the Earl. Other names you’ll recognize – Miranda Richardson, Penelope Wilton (also known as Mrs. Crawley on Downton Abbey), Matthew Goode, and Emily Watson.  Last of all, Sam Reid, will sweep you off your feet, as Belle’s love interest.