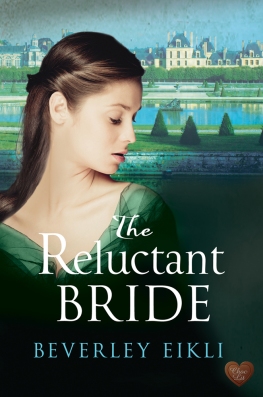 Emily Micklen is proud, passionate – and left with no option after the death of her loving fiancé, Jack, but to marry the scarred, taciturn, soldier who needs to secure a well-connected wife.

Major Angus McCartney hopes that marriage to the unobtainable beauty whose confident gaze about the ballroom once failed to register his presence will offer both of them a chance to put the past to rest.

Emily’s determination to be faithful to Jack’s memory is matched only by Angus’s desire to win her with honour and action. Sent to France on a mission of national security, Angus discovers how deeply Emily has been duped, but the secrets he uncovers lead them both into danger. Can Angus and Emily unmask the real conspirators before they lose everything?

Beverley Eikli is the author of eight historical romances published by Pan Macmillan Momentum, Robert Hale, Ellora’s Cave and Total-e-Bound. Recently she won UK Women’s Fiction publisher Choc-Lit’s Search for an Australian Star competition with her suspenseful, spy-based Regency Romance The Reluctant Bride.
She’s been shortlisted twice for a Romance Readers of Australia Award in the Favourite Historical category — in 2011 for A Little Deception, and in 2012 for her racy Regency Romp, Rake’s Honour, written under her Beverley Oakley pseudonym.
Beverley wrote her first romance when she was seventeen. However, drowning the heroine on the last page was, she discovered, not in the spirit of the genre so her romance-writing career ground to a halt and she became a journalist.
After throwing in her job on South Australia’s metropolitan daily The Advertiser to manage a luxury safari lodge in the Okavango Delta, in Botswana, Beverley discovered a new world of romance and adventure in a thatched cottage in the middle of a mopane forest with the handsome Norwegian bush pilot she met around a camp fire.
Eighteen years later, after exploring the world in the back of Cessna 404s and CASA 212s as an airborne geophysical survey operator during low-level sorties over the French Guyanese jungle and Greenland’s ice cap, Beverley is back in Australia teaching in the Department of Professional Writing & Editing at Victoria University, as well as teaching Short Courses for the Centre of Adult Education and Macedon Ranges Further Education.
She writes Regency Historical Intrigue as Beverley Eikli and erotic historicals as Beverley Oakley.
Beverley won the Choc Lit Search for an Australian Star competition with The Reluctant Bride.
Shortlisted for the 2012 Australian Romance Readers Award for her novel Rake’s Honour
Finalist in the 2011 Australian Romance Readers Awards for her novel A Little Deception.

7 thoughts on “Book Promo: "The Reluctant Bride" by Beverley Eikli”